Discover how Cooltra keeps you safe 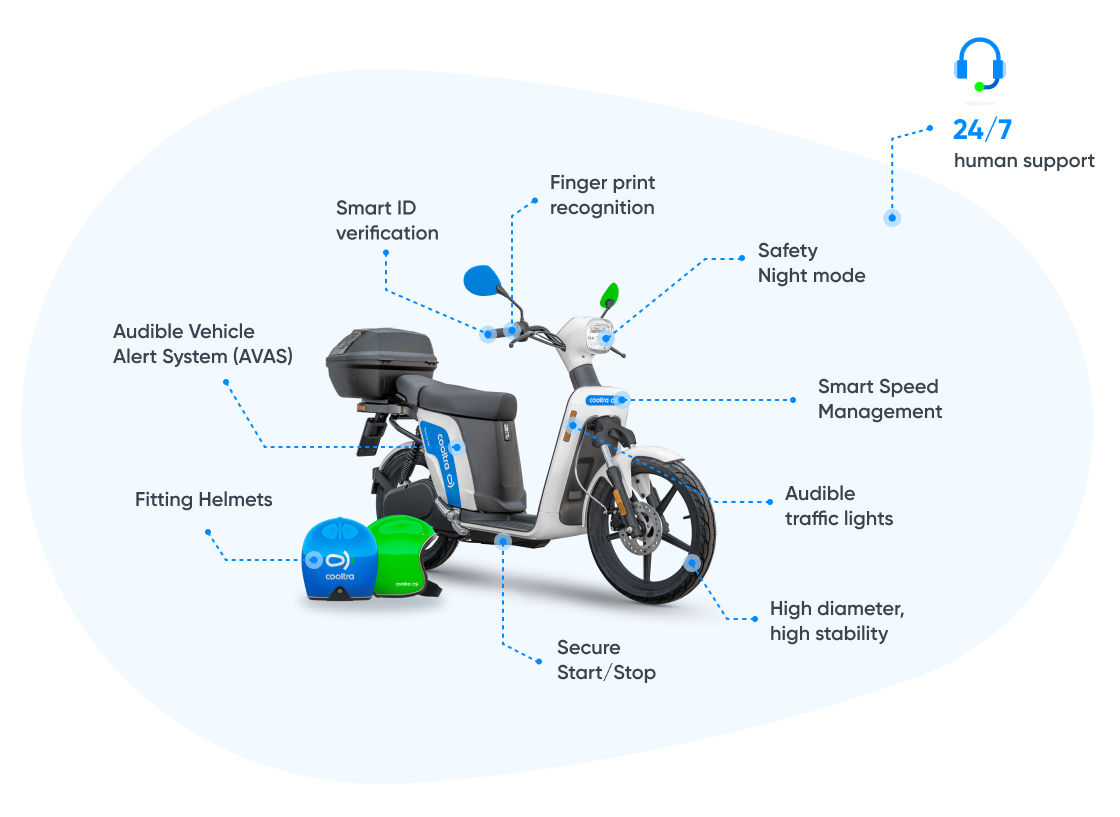 Driving a vehicle on public roads means acting responsibly to protect yourself and others. At Cooltra, we are highly aware of this; it is something we have been striving for since we launched in 2006. For this reason, we actively seek out new technologies and innovations that play their part in improving the road safety of our users and those around them.

In this article, we would like to shed some light on what we’ve done to fulfil our commitment to safety. However, before we start, we must point out that safety starts by being aware of your skills and knowledge when driving a scooter. If you think you could do with some two-wheeler training, please contact us (bonjour@cooltra.com) and we’ll give you information on how to take a free course with our partner to gain experience and boost your confidence while riding one of our electric scooters.

At low speeds, electric vehicles are virtually silent, making them difficult to spot for pedestrians and even more so for the visually impaired. In the United States, according to a study conducted by the National Highway Traffic Safety Administration, electric vehicles are involved in 37% of pedestrian accidents and 56% of accidents involving cyclists. For this reason, various parapublic sector organisations have advocated the introduction of an “Audible Vehicle Alert System” (AVAS) for all silent vehicles.

At Cooltra, we have been trailblazers in rolling out this new regulation. Since 2018, all our Askoll self-service scooters, emit a sound that makes other road users aware of their presence. This sound is in no way equivalent to that emitted by vehicles with internal combustion engines, as it is much less noisy. 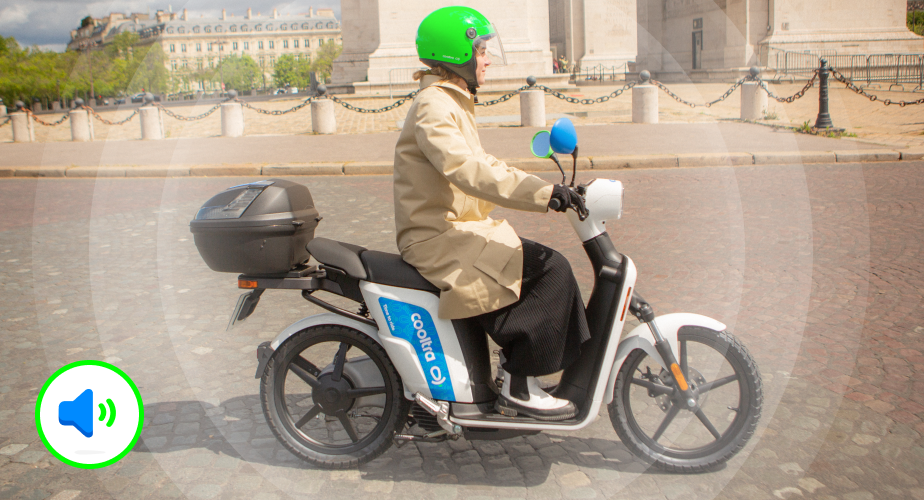 One way of working on the inclusiveness and safety of our service was to offer, from the outset, two certified helmets with each scooter. They come in two different sizes, L and M as well as in two different colours so they can be easily and quickly recognised: blue = L and green = M

Offering two sizes means more people can use the service, with complete peace of mind. What’s more, by having two helmets, we make it easier for people to use Cooltra scooters who are not qualified to drive electric scooters and who are accompanied by a person who holds a licence.

Finally, it should be noted that our helmets are equipped with an adjustable strap and buckle to perfectly adapt to users for greater safety. Don’t forget that wearing a correctly fitting helmet is of the utmost importance when it comes to preventing it from coming off in the event of an accident. 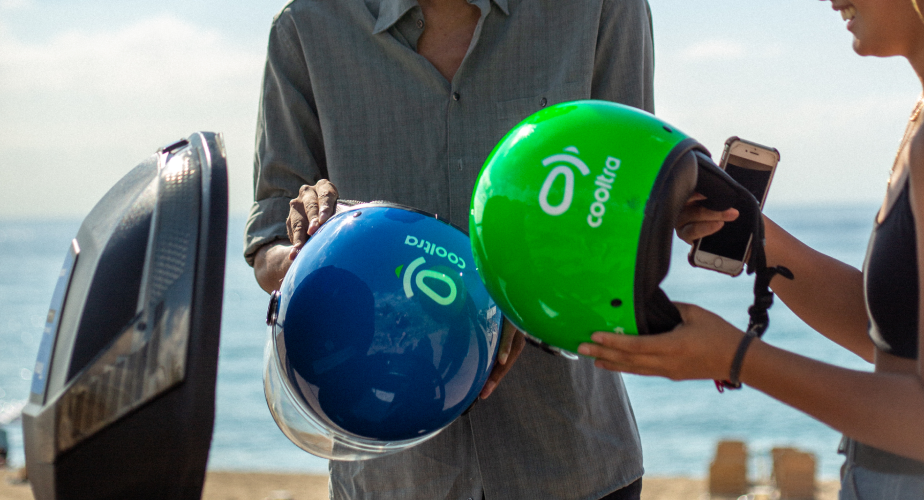 Did you know that mopeds (low-powered scooters with a speed limit of 45 km/h), like those in our self-service electric fleet, are the type of vehicle involved in the lowest number of serious accidents? Nevertheless, this is still not enough and we are aware of this. Mobility trends in cities are changing, and they are changing even faster in light of the COVID-19 pandemic. We have all seen a number of things: an increase in the number of 30 km/h zones; the disappearance of lanes for scooters and cars; walking and cycling are being fostered…. In short, speed limits are changing and scooter riders need to adapt and respect these limits.

So, Cooltra is working on a warning system for users. This signal will warn you whenever the maximum speed is exceeded. We hope to be able to announce the launch of the “geo-speed” technology in our fleet very soon.

Cooltra scooters are equipped with a sensor on the centre stand that indicates whether the stand is fully lowered or not. This sensor is also responsible for activating and deactivating the engine start option. This small development, which may not seem important, has prevented many accidents, as it prevents the rider from unintentionally accelerating the scooter before it is ready, or even when it is parked.

We are aware that this safety measure could be improved, which is why we are working with our engineering team and our manufacturer (Askoll) to develop a user detection system. The aim of this measure is to check, by means of the weight on the seat, whether the driver is actually sitting on the vehicle before setting off. This would even switch the engine off if the driver’s weight were to fall off the seat or if an accident caused the driver to lose their balance on the seat, thereby preventing further damage. 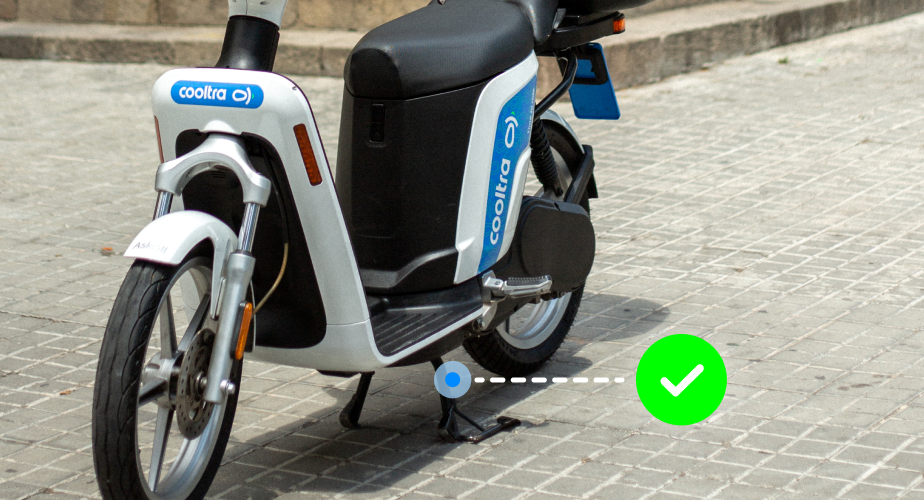 Cooltra’s self-service scooter model, the Askoll eS2, is the only one in the industry to offer a 16-inch wheel diameter, the largest on the market, offering 4 to 6 inches more than its competitors. Offering a rim with an extra diameter of +33% to 60% makes a big difference between using our scooters (large diameter) or those of our competitors (small diameter).

In fact, the 16-inch wheels allow Cooltra scooter users to benefit from greater stability and better handling. It has also been proven that high wheels provide better dynamic behaviour, suspension and braking performance. With 15 years’ experience in the scooter industry, Cooltra has developed its expertise with these key features in mind. 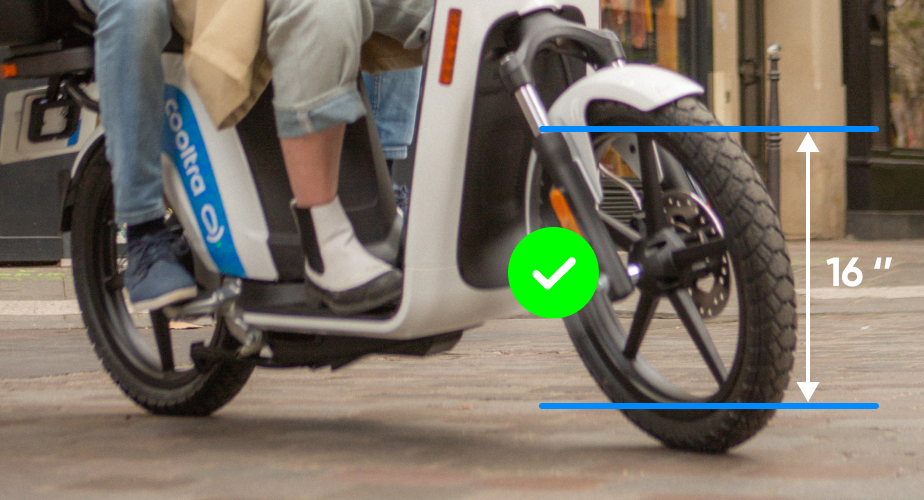 One of the manoeuvres that leads to the largest number of accidents is changing lanes. This is why it is of the utmost importance to use the indicators correctly to signal this type of lateral movement or change in direction.

On our scooters, you will hear a warning sound as soon as you turn on one of the indicators, as well as the visual signal (on the front and rear, and on the dashboard): the “Puig” sound. This sound is used to remind you to turn off your indicator when you have finished your manoeuvre and to warn those around you of your movements.

But, where does the “the Puig sound” come from? Albert Puig is a legend in the Cooltra team of mechanics, and a lifelong scooter enthusiast. He has always warned us about the usefulness and necessity of this sound as a way to boost safety. Thank you Puig! 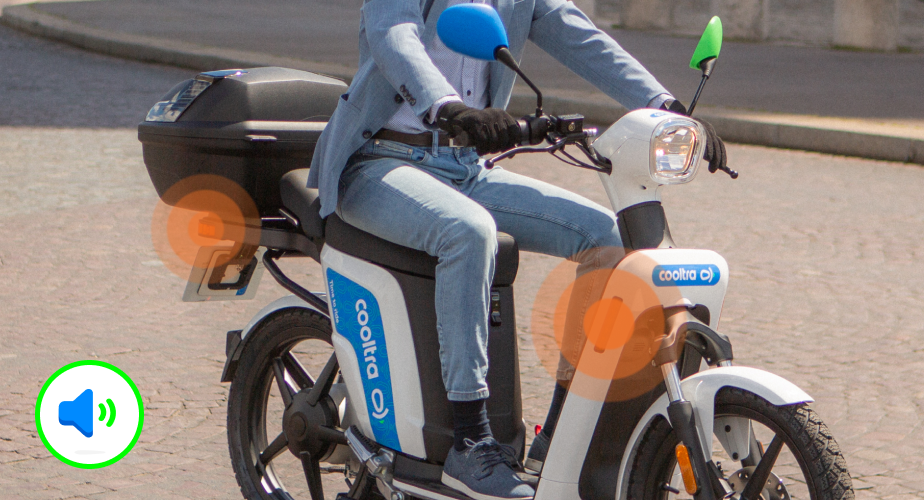 At Cooltra, it is extremely important to us that our users behave in an exemplary manner when using our service. That is why we deliver a wealth of training and communicate regularly to ensure that they are aware of what good behaviour entails. Nevertheless, there is one aspect that requires special treatment: avoiding mixing alcohol and drugs with driving. We know from experience that it is at night, and on certain days of the week in particular, that drivers are handed the most fines (whether they are driving a private or shared vehicle, car or scooter).

This is why Cooltra is developing (currently in an internal test phase) the night safety mode. This is a new app feature with the aim of deterring people from driving under the influence of alcohol or drugs. The night safety mode is automatically activated every night between 22:00 and 06:00 and is activated for any user that uses our application. With this night safety mode, we send a clear awareness message to the user asking them to unlock the application with a verification code. The application reminds the user that they can only continue to use the service if they are fully fit to drive. If not, we suggest another mode of transport. 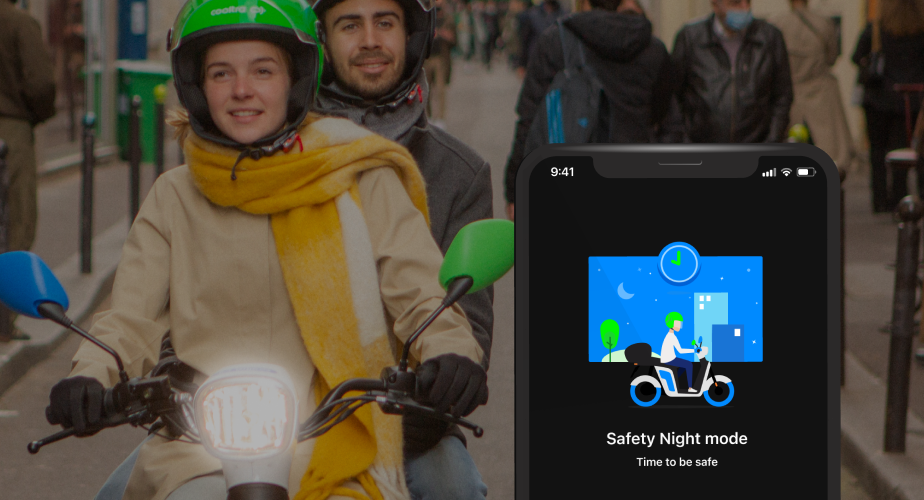 Cooltra has been part of the European MADRAS consortium since 2020. As part of a research and development project under the EU’s Horizon 2020 funds, the MADRAS consortium is working to develop OLAE (Organic Large Area Electronics) devices, which use carbon-based materials. This makes them much cleaner and cheaper, while being more affordable than traditional silicon devices. OLAE devices have applications in the fields of IoT, wearable technology, automotive, healthcare, logistics, etc.

Thanks to our participation in the consortium, we will be testing a sensor which, in conjunction with telematics and our back-end interface, enables the scooter to be activated after recognising the user’s fingerprint. This pilot will be launched in 2023 and is a further step in the search for solutions to mitigate the theft or falsification of the identity of the user of a vehicle, and all the risks and costs that this entails. 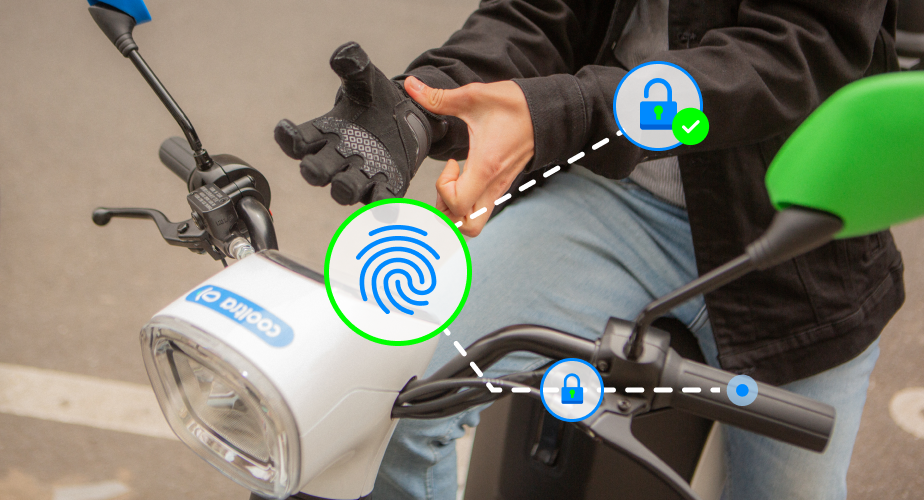 Cooltra’s services are only available to people over the age of 18 who can accredit their identity. This is why we have biometric facial recognition. During the user registration and verification process, this technology allows us to quickly and reliably identify the user by comparing the image of the driver’s licence, ID card and a photo taken on-site.

In addition to identity verification, the age and type of vehicles in the Cooltra fleet to which you will have access depending on the type of driving licence held are also checked. If the use of advanced technology is not sufficient and there are doubts to the veracity of the images provided, the validation process activates human verification and our team of agents carries out a final check, contacting the user if need be. 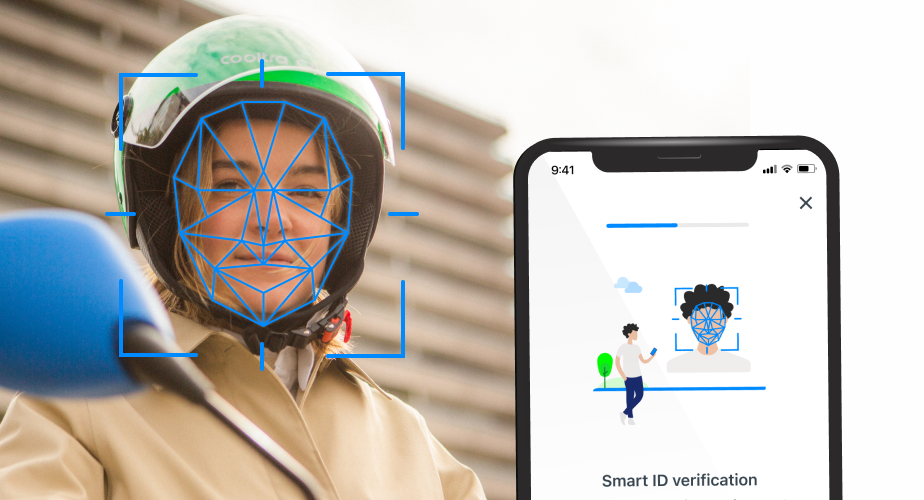 In the event that all the security measures put in place are insufficient, and in line with our commitment to our users, Cooltra has a support team available 24/7. This team provides support by phone, chat and email. What’s more, we employ multilingual staff, with native speakers of one of the following six languages: French, Italian, Spanish, Catalan, Portuguese and English.

This remote customer service is supported by our operational team: the maintenance teams are organised in such a way that there is always at least one person available in each city to deal with an emergency.

At Cooltra, we are used to saying "It's time to ride"! Nevertheless, let's go one step further: #Ridesafely!
Rent by minutes/hours individuals
FAQs Terms & conditions