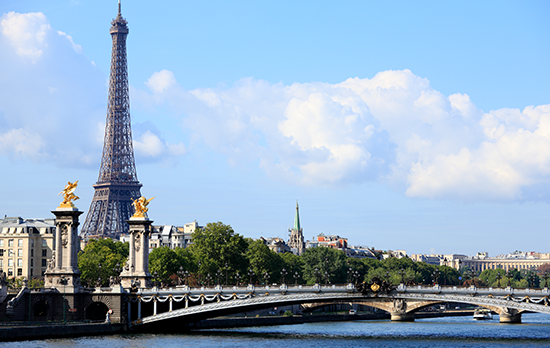 Known as the city of love, Paris is perfect for long romantic strolls through the Montmartre and Le Marais neighbourhoods or along the banks of the Seine. This city, besides being an open-air museum, offers countless places to see.

Here is a list of the 5 must-see places to visit in Paris:

This 300-metre-high building was designed by Gustave Eiffel for the 1889 World´s Fair held in Paris. Parisians originally hated the tower, but over time it has become the symbol of the city and the world´s most visited monument. It is located at the northwestern end of the Champ-de-Mars park on the banks of the Seine river in the 7th arrondissement. To make your way to the iron structure´s highest observation deck, you can take a lift or climb the staircase´s 1665 steps. For the best views of the Tower, we recommend heading to the spectacular Place de Trocadero, the lawn of the Champ de Mars, the banks of the Seine, the Montparnasse tower or Rue de l’Université, all of which you can reach on your motorcycle. Important information: to skip the long queues at the ticket office, the best option is to buy the ticket online, directly from the official website.

Open to the public since 1793, it is the world´s largest and most visited museum, housing more than 380,000 objects and 35,000 works of art. Some of the most important masterpieces in history are housed there, such as Leonardo da Vinci´s Mona Lisa, the Venus de Milo or the Seated Scribe from ancient Egypt. It is a universal institution. It receives over 8 million visits every year. Inaugurated at the end of the 18th century, this huge space is located in the Louvre Palace, a former royal palace situated between the Tuileries Gardens and the church of Saint-Germain-l’Auxerrois in Paris. Remember that, to skip the long queues, you can buy your ticket in advance.

It is one of the oldest Gothic Cathedrals in the world and one of the best-known. It was built between 1163 and 1345 on the small Île de la Cité, surrounded by the waters of the Seine River. It is a Catholic cathedral which was consecrated to the Virgin Mary. Unfortunately, as a result of the fire in 2019, it is only possible to get a glimpse of its magnificent exterior, in which the western façade and the two towers stand out. Above the front doors there are 28 statues representing the kings of Judah.

The Latin Quarter is right next to Notre Dame, on the left bank of the River Seine. The area gets its name from the Latin language, which was widely spoken in the area during the Middle Ages. You can take advantage and visit both by taking a tour with your motorcycle.

Built between 1806 and 1836 after it was commissioned by Napoleon to commemorate his great victory at the Battle of Austerlitz, the Arc de Triomphe in Paris is no less than 50 metres high by 45 metres wide and was inspired by the Arch of Titus in Rome. You will be able to ride there on your motorcycle, as it is located in the 7th arrondissement of Paris, in Charles de Gaulle Square, encircled by a busy, car-filled roundabout. As well as being an emblematic symbol of Paris and the whole of France, this Arc de Triomphe is an excellent viewpoint with the best views of the world´s most beautiful avenue, the Champs-Élysées.

Make sure you take a stroll down this iconic two-kilometre Parisian avenue connecting the Arc de Triomphe with the Place de la Concorde. Whether you ride or walk, you will see the countless windows of luxury shops, international restaurants and grand historic buildings such as the Petit and Grand Palais. If you take advantage of your visit to the Arc de Triomphe to then wander down the avenue, you will eventually reach the Place de la Concorde, where, during the French Revolution, more than 1,000 people were executed by guillotine and where you can now see a 3,300-year-old Egyptian obelisk. Past the square are the Tuileries Gardens.