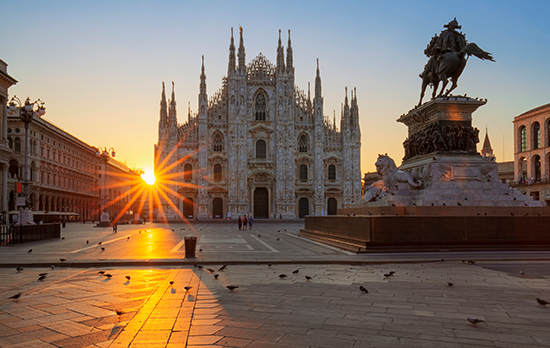 Capital of the region of Lombardy and northern Italy, it is perfect to spend a few days strolling around its historic centre that revolves around the impressive Duomo, going shopping in its most commercial streets, unwinding in its large parks…

Here is a list of the 5 must-see places to visit in Milan:

The Duomo is one of the world’s most beautiful cathedrals and a must-see when visiting Milan. Construction of this Gothic building got underway at the end of the 14th century and took five centuries to complete. It is notable for its pink-hued white marble façade and for its terrace with ornate spires with niches, sculptures, reliefs and crowned by a statue. It houses the Statue of Bartholomew the Apostle, a huge organ and a marble Renaissance-style altar, with a nail from the Cross of Christ on the back. Tourists love its incredible terrace, from where they can take in the breathtaking panoramic views of the historic city. A good option to avoid queues at the monument is to book a fast-track ticket with access to the terrace.

Located about 10 minutes’ drive from the Piazza del Duomo, it houses one of the masterpieces of art history and is another one of the must-visit places in Milan. On the wall of the dining room of this former Dominican convent, Leonardo da Vinci painted the fresco of “The Last Supper”. In the painting, the figure to the right of Christ stands out, due to its feminine features, which could be Mary Magdalene who, according to some theories, was Jesus’ wife, which was also one of the storylines used by Dan Brown in his famous novel “The Da Vinci Code”. We recommend booking a guided tour in advance.

Originally a fortress built in the 14th century, it was occupied successively by the French, Spanish and Austrians. It was destroyed by Napoleon in 1801 and rebuilt a century later to restore it to the appearance it had in the heyday of the Sforza family. It houses an art gallery, two libraries and more than ten museums. The castle is open every day from 07:00 to 19:30 and admission is free.

Dedicated to one of the most important kings in Italian history, known as the “Salón de Milán”, it was built in the 19th century in the shape of a cross. Highlights include its large glass dome that connects Piazza del Duomo with Piazza La Scala, two of the city’s most popular squares. Inside it has luxury boutiques, historic cafés such as Café Biffi and restaurants. There are also several mosaics spread around the floor and walls, including the She-wolf of Rome and the Torino bull, which has a small hole in the mosaic, which is said to bring good luck if you put your foot inside and spin around three times.

This is the canal district, the city’s most alternative location and with a buzzing atmosphere every night. It is famous for its two large canals: Naviglio Grande and Naviglio Pavese, the only two that remain from the time when Milan was accessible from the sea. A century ago, they ceased to be useful as a means of transport and have now been converted into a beautiful promenade full of boat-restaurants, terraces and a lively nightlife. A good way to check out this neighbourhood from a different perspective is by booking a cruise.