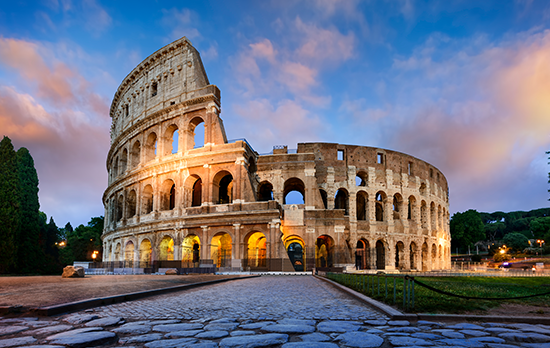 Known as the eternal city, Rome is like an open-air museum with monuments more than 2,000 years old. As you stroll through its streets, you’ll feel like you’re in another era. In addition, the city has one of the best gastronomies in the world.

Here is a list of the 5 must-see places to visit in Rome:

This fountain, located in the Trevi neighbourhood (rione), occupies the entire side of a small square. The monument was completed in 1762 and is one of the largest monumental Baroque fountains in the city of Rome. They say that it is the most beautiful fountain in the world. One interesting fact is that the name Trevi comes from “Tre Vie”, since the fountain is at the junction of three roads. By the way, don’t forget to toss one coin if you want to come back to Rome, two if you want to find love or three if you want to marry the person you just met. It’s also said that for this to work, you must toss the coin with your right hand over your left shoulder.

One of the best things to do in the city is to travel more than 2,000 years back in time by entering the Colosseum, the most spectacular monument in Rome and one of the Seven Wonders of the World. Located on the bank of the Tiber, this incredible building bears the original name “Flavio Amphitheatre” as it was built by the Emperor Vespasian around 70 AD under the Flavian dynasty. In this large stadium with a capacity for 60,000 spectators, the emperors distracted the people with shows of all kinds such as gladiator fights, re-enactments of battles or prisoner executions. To avoid the queues, you can book a tour of the Colosseum, the Forum and the Palatine. You can also ride a scooter around the outside of the amphitheatre, which is elliptical in plan.

This is one of the most outstanding urban spaces in the city with sculptures, fountains and buildings of great artistic value. In addition, it is a centre of social, cultural and tourist life. In this elongated square, its three Baroque fountains stand out: the Fontana del Moro, the Fontana del Nettuno and the Quattro Fiumi. The last one is the most spectacular, representing the 4 most important rivers of that time: the Danube, the Nile, the Ganges and the River Plate. Here you can taste one of the best tiramisu in Rome and truly enjoy this bustling square full of music and street performers. Near the square there are some alleys where you can park your motorcycle.

The ancient temple was completed in 125 AD and is considered the best-preserved building of the Roman Empire. It is one of the best things to see and do in the city and admission is completely free. It was commissioned by Marco Agrippa during the reign of Augustus but was finished by order of the Emperor Hadrian. This architectural work stands out for its impressive dome with a central opening (oculus) that fills its interior with natural light. It has been in continuous use throughout history, being used as a church since the 7th century, and is currently named the Basilica of St. Mary of the Angels and the Martyrs. The square in front of the Pantheon is called Piazza della Rotonda and gives one of the districts in the city its name.

This is one of the most famous neighbourhoods in the city, specifically it’s the 13th rione of Rome’s historic centre. It is located on the west bank of the Tiber, south of the Vatican City. The site is brimming with charm, craft shops and taverns with a bohemian air, which make it another of the most beautiful places in the city.