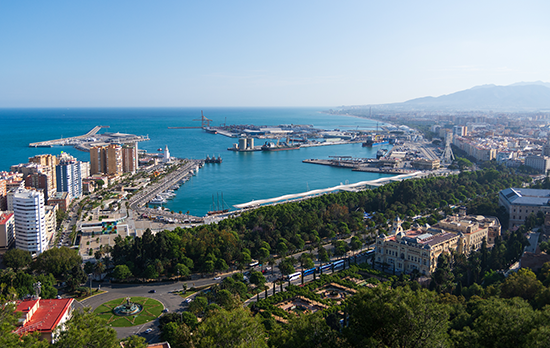 This city on the shores of the Mediterranean was founded by the Phoenicians in the 8th century BC. It has a great cultural and architectural heritage, great beaches, as well as numerous restaurants and bars where you will enjoy the atmosphere and gastronomy.

Here is a list of the 5 essential places to see in Malaga:

THE ALCAZABA AND THE ROMAN THEATRE

Probably the city´s best known tourist attraction. The palace was built in the 11th century on a hill overlooking Malaga. It was the home of the Muslim rulers and a fortress to protect and defend the city from the Catholics. It has been extremely well preserved; you can discover the courtyards, fountains and gardens. Another must is to visit the Roman theatre located at the bottom of the Alcazaba. It’s the oldest site in Malaga, built in the first century AD by Augustus and was used as a theatre throughout the 2nd century. Later, it was converted into a cemetery, for it to then be abandoned. Some of the rocks from this site were used to build the palace.

From the Alcazaba, the castle can be reached on foot along a trail with breathtaking views. It was built in the 14th century to protect the Alcazaba. It had a barracks to house the soldiers, similar to a lighthouse, hence the name of the castle, Gibralfaro which means “mountain of light”. It is said to have the best panoramic view of Malaga, and it is also a great place to visit at night.

One of the tallest in Andalusia, it is located in the historic city centre and is visible from almost any point in the city. Construction got underway in the 16th century on the site of a former mosque. Building the cathedral was an epic project that took some 200 years. Such was the project´s cost that, by 1782, it was decided that work would stop. As a result, one of the two bell towers was left incomplete, hence the cathedral’s well-worn nickname, La Manquita (The One-Armed Lady). You can climb the 200 steps to reach the 87-metre high tower and take in a 360º panoramic view of the city.

While in Malaga, it would be a shame not to enjoy the beaches; perfect to relax and disconnect a little! Located next to the port is Malagueta Beach, the closest beach to the city centre. To the east of Malagueta is Pedregalejo Beach. If you prefer a family-friendly beach located in the fishermen´s quarter, we recommend Playa El Palo. Along the beaches, there are bars and food stalls, “chiringuitos”, where you can sample fish and seafood. The specialty in Malaga is grilled sardine skewers.

Located in the northern part of the city, it is the most important in Spain and one of the best in Europe, a little treasure with more than 150 years of history created by the Marquises of Casa Loring and later extended by the Echevarría Echevarrieta family. There are more than 2,000 species of trees, bamboos and plants spread over approximately 250,000m2. The garden was a meeting place for marquises, politicians, aristocrats and noble people of the time who came here to enjoy nature and to socialise.